On 3 and 5 July of this year, in Madrid and Barcelona respectively, AMBILAMP, the Lighting Recycling Association, held its Members’ Meetings which take place every year at around this time. 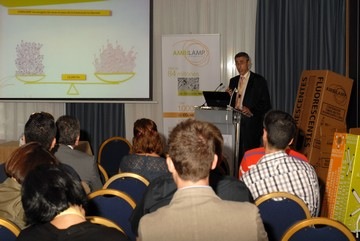 On 3 and 5 July of this year, in Madrid and Barcelona respectively, AMBILAMP, the Lighting Recycling Association, held its Members’ Meetings which take place every year at around this time. At both meetings, which were held at the Hotel Meliá Barajas in Madrid and at the Hotel NH Constanza in Barcelona, a welcome was given to new producers of both lamps and luminaires that have joined the Association since June 2012.

The events continued with the operating summary of the CRSO, with information on the global collection results of AMBILAMP from the onset of its activity to date, the evolution of these data during the present financial year, types of collection channels and the evolution of the corresponding collection points as well as underlining the collection volume targets for 2013.

There was an advance on the new developments included in the new European Directive on Electrical and Electronic Equipment Waste (Directive 2012/19/EU) which will demand more ambitious and stricter legal collection targets for the coming years and a better segregation of this type of waste. Equally, actions for growth carried out in the last year were outlined and detailed information was given on the main projects for the upcoming 2013/2014 period. Notable among these are the continuation and consolidation of luminaires collection and recycling.

As a finishing touch, the marketing actions carried out over the last year were explained and there was a presentation of the launch of the new campaign being run in collaboration with Metro de Madrid, the aim of which is to raise awareness among users of this public transport network regarding the importance of recycling low-energy bulbs, fluorescents and retrofit LEDs.